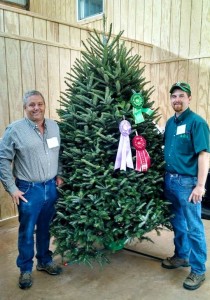 Trees entered in the NCTA contest must fit into one of five species categories: True Fir, Douglas-fir, Spruce, Pine or Other. A panel of judges, made up of long-time growers and past contest winners, selected the first-, second- and third-place winners in each category, then attendees of the regional conference and a panel of consumer judges voted for their favorite among the species first and second place trees. Those vote totals determined the Grand Champion and Reserve Champion trees.

To enter NCTA’s national contest, growers must first win their state/regional competitions in the previous 24 months. “I was ecstatic when I heard my name called,” said Vander Velden. “The (national) tree contest is the super bowl for Christmas Trees… What an honor.”

Jay Bustard echoed that sentiment and described how much goes into getting a tree ready to compete in the National Tree Contest. “We are fortunate to be voted one of the best trees in the contest by our peers,” said Bustard. “Our employees were a big part of growing this tree. We thank them.”

White House staff members typically travel to the Grand Champion’s farm in the fall to select the tree that will serve as the centerpiece of the Blue Room holiday decorations. The Blue Room tree will need be 18 ½ feet tall, much bigger than the 6- to 8-feet trees entered in the contest.